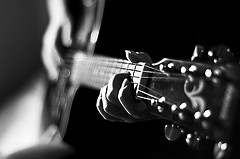 I’ve long been fond of George Harrison’s “While my Guitar Gently Weeps,” and not just because it’s one of the best Beatle songs on an incredible album loaded with creative dichotomies.

It also has a great story about how it came to be.

Fresh from a trip to India, Harrison was keen to incorporate Eastern philosophy into his work. This included committing to the idea that things can happen for a reason” if you let them. Harrison decided to test this by promising himself that he’d write a song based on the first words he read when opening a book chosen at random.

From a book in his mother’s library he read “gently weeps” and interesting things happened. The outcome was a timeless song. This example teaches that inspiration can be anywhere…and that it’s often found when and where you’d least expect it.

But you need to open yourself up to new experiences to make this happen.

Here are 21 things you can do—and think of each one as a place you can go—to add fuel to your own creative fire and find new inspiration, no matter what kind of work you do”

Read about something you don’t know much (or anything) about. There’s no fiercer potential to untap than that of a beginner’s mind.

Do something other than sit at your desk.

Spend time with people outside of your usual social circle.

Read Metafilter and its companion AskMetafilter. Don’t skip the comments.

Do something that scares you.

Play guitar. Or the kazoo. Or the bongos. Anything musical.

Learn how to bake bread.

Teach what you know: it will teach you what you *don’t* know.

Look for examples rather than explanations to illustrate an idea.

Listen to your music in random shuffle mode.

Read more poetry. Write some, too.

Strike up a conversation with a stranger.

Draw. Even if you don’t think you’re much of an artist.

Turn off the radio, close your book, switch your phone to vibrate, shut off your computer, and spend a little time in the company of your own thoughts. It doesn’t have to be meditation, it just has to be quiet time for your mind.

Take a position on an issue that is entirely opposite to your personal beliefs and defend it.

Stop relying obsessively on to-do lists and just do something impulsive.