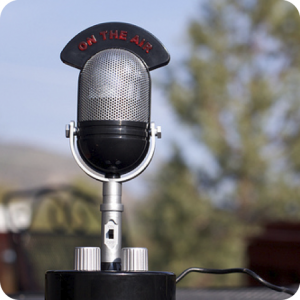 You are a broadcaster (photo by cogdog on flickr)

I’m in the middle of doing some in-depth research for an important project, and I find myself thinking a lot these days about the nearly lost legacy of Charles Herrold.

It’s okay if you have no idea who he was. I hadn’t a clue either until I started reading up on the early history of radio.

Charles Herrold was a radio pioneer.

He coined the terms broadcasting and narrowcasting—possibly as early as 1909, and well before the eventual rise of radio’s golden age in the 1930s and 40s, by which time these were household names.

Like so many great words, broadcasting and narrowcasting were borrowed ideas: terms that were used to describe the farming method of sowing seeds from a container that spun outwards in all directions rather than in neat rows.

In choosing these words to describe the scattering approach of this new medium, Herrold showed that he understood the enormous potential of radio as an all-new way of reaching a lot more people than ever before, all at once.

Not just the select literate few of society, as was the case in the 18th and 19th centuries with book publishing and newspapers. All people. Not just with one program, but many.

Through radio and the way that Herrold (among others) saw its application, message became content.

So why then is Herrold such a lesser-known in broadcasting history?

Most mentions of him indicate that he never made a profit from the industry that he helped pioneer.

Professor Mike Adams of San Jose State University summed up the problem this way: “He was in the right place at the right time” but he had the wrong technology.”

Herrold’s broadcasting was based on what engineers call the arc method, while others opted for a method involving vacuum tubes. I’ll spare you the technical details here.

What’s important to know about the arc method of broadcasting was that it sounded awful.

His audience couldn’t hear him as well as they could have. So they went elsewhere.

According to several public records, Herrold died in relative obscurity. Meanwhile, his radio counterpart, Frank Conrad went on to be celebrated in the New York Times as the “father of radio broadcasting.”

There are valuable lessons in this story that you can apply to your business and marketing efforts today.

First, it’s not enough to have good ideas or even to see the potential of something ahead of others.

Second, if you’re in the people business (and odds are very good that you are), you are a broadcaster. You can’t build an audience if people can’t hear you properly.

Let me repeat that…

“If you’re in the people business, you are a broadcaster. You can’t build an audience if people can’t hear you properly.”
Click to tweet this.

Make sure you have the right tools that cut through the noise. And remember: you have less time than you think to capture and maintain your audience’s attention.

Third, create great content just as you would build any other exceptional product in your business. Get it into the hands of your audience in a way that is most convenient for them.

These matter ahead of all things when you’re in the people business.