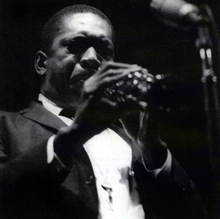 Don’t let it scare you that I just name-dropped one of the giants of jazz.

Or that Coltrane’s music seemed complicated.

This post isn’t going to preach jazz to you. And the jazz police aren’t going to show up and arrest me for having the gall to use America’s finest art form as a platform to illustrate an important point about the power of audience building.

There’s valuable insight in here even if jazz isn’t your thing.

As a reader of thinkit creative, you could be here looking for advice on search-engine optimized writing for the web to generate online traffic and convert readers into buyers. Maybe you’re a writer looking to build a base of readers. Or perhaps you’re a professional speaker or you own a design studio and you’re looking to take your business to the next level of profitability.

Odds are good that you’re in the idea business. And that means your success hinges on finding and building an audience.

John Coltrane can help you with that.

Even this giant of music started without an audience.

As a young musician, John Coltrane loved how saxophonist Charlie Parker wasn’t afraid to be playful with his music.

He emulated what he heard. Not as a cheap cut-and-paster of style.

Rather, his drive to decode Parker and other influential players became part of young Coltrane’s relentless practicing. Biographies on the man often quote fellow musicians who knew him early on, saying they’d never seen anyone put in the hours the way Coltrane did.

Out of the hours came the admirers. From the admirers came the listeners. And then the big breaks, like when he was invited to tour with the first time. Then the audience took hold and the Coltrane legend grew. It’s hard to imagine any of that happening in Trane’s career without the roots of discipline being as strong as they were.

“Jazz…is a social music operating in a commercial context,” says Ben Ratliff of The New York Times in his book Coltrane: The Story of a Sound. “You give the audience what you think it wants. At the same time, you improvise, and try to bring out the part of you that is the least like anyone else.”

Groundbreaking ideas rarely find their audience quickly. It starts with thinking deeply about your audience and having as much of an understanding of what they want as what they might also be open to. Research will help you, but only up to a certain point.

Intuition goes well beyond calculating a market penetration or measuring the size of an audience. There’s a deeper art. And you only get to exercise that by trying and by experimenting based on a mix of what you know is true and on a hunch you have about what might be true.

Coltrane learned the hard way early on that masterful technique alone doesn’t win many ears. In fact, more than one audience in his career booed him for doing just that. He learned that ideas—especially the big ideas—have to be presented in a way that are pleasing to others. Often that means taking the time to package your ideas attractively.

One of Coltrane’s great achievements in the American songbook is what he did with his interpretation of the Rogers and Hammerstein classic show tune, My Favorite Things. The music says more than I can say in paragraphs about that. So have a listen.

To find and build an audience, your idea or your message needs a platform. My Favorite Things was a platform for Coltrane that helped him bring big-headed jazz to a wider audience. So what’s your platform? It can be a blog, an ebook, a series of newsletter articles, or a presentation (to name just a few examples). Invest the time to design that platform properly. Hire a good designer who can help you build something that people will enjoy using. That’s the front door. It’s how you’re going to invite your audience in so that they’ll stick around and see what else you have to say.

Mastery of any creative skill only comes from finding good influences and by putting in the hours to hone your skills. Work to emulate. This is how you learn how great ideas are constructed. Only then can your own voice emerge. Take chances and find ways to build entranceways for people to access even your edgy ideas with relative ease.